2020 is already going to be one of my most exciting years yet! My first, full calendar year out of academia, I’m hoping to exercise some of the freedom that I have now and learn to adapt to the freedom I used to have in school. But most importantly on my list, I’m hoping that this year contains a lot of travel and a lot of live music. Here are some of the things I’m already looking forward to.

As most of you probably already know, Ween is by far my favorite band. Every night I see them is the best night of my life. In February this year – just a couple of weeks away- I’ll be spending three nights with Ween in two different cities. It’ll be my first concert in Connecticut ever, and my first trip to NYC of the year!

The last times I saw Ween, the setlists were made up of mostly their nicest sounding music – a lot of stuff from the middle of their career, a lot of songs from their better known albums. It was great to hear a few of their songs for the first time ever: “Push Th’ Little Daises,” in particular, hearing that song for the first time was a joy. This time, I’m hoping to hear more of the Brown stuff. I’ve never heard them play “Laura” and it’s been three shows since I heard “Frank.”

The Year of Ty Segall

If 2018 was the year of Ween, and 2019 was the year of King Gizzard, 2020 is looking like it’ll be the year of Ty Segall. He’s hitting the road as a solo artist and with his band Fuzz, whose bassist Chad Ubovitch I saw at one of my absolute favorite shows of 2019. Segall has been a favorite of mine for years, and his 2019 release First Taste was my favorite album of the year. His shows will be the bookends of the summer, with the Fuzz performance in Boston on June 22 and the Ty Segall solo show on September 28th.

When I chose to move to my home state again after college, it was because I missed a few of the things Maine has that you truly can’t get anywhere else. It seems like the rest of the world is catching on to how special this place is (Lonely Planet named Maine the #4 Must-Visit Destination of 2020), and I couldn’t be prouder to call this place home.

Highest on my list of places to visit is the tippy top of Maine, Fort Kent. I’ve never gone all the way to the top of the state, and I would look forward to an opportunity to travel through the amazing wilderness that creates the state of Maine. I’ve also never spent extensive time in Bath, a coastal town that I have a fondness for, and have never visited Baxter State Park. So there’s plenty to do and see in my own backyard.

I’m making my first trip to the SouthWest this year to spend two nights with King Gizzard and the Lizard Wizard at Red Rocks Amphitheater. I couldn’t be more excited about those two 3-hour sets with no repeats (I’ve seen Gizzard three times and have still never heard Rattlesnake), and I’ve been hoping for an excuse to go to Colorado for years. I’m hoping to check out some of the things that make the Denver area special, and would love to hear suggestions from people who have a favorite spot to hike or eat!

And on top of all this, there are plenty of adventures that I’ll probably go on that I don’t even know about. There’s a puppet festival in Montreal every September — Nova Scotia is just a long weekend away.

read some of my favorite adventures of 2019

King Diamond at the Palladium in Worcester, MA

Ruckzuck at Geno’s Rock Club in Portland, ME

Scrapbook: A Disposable Camera Haul from the Norwegian Gem 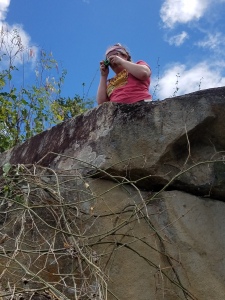